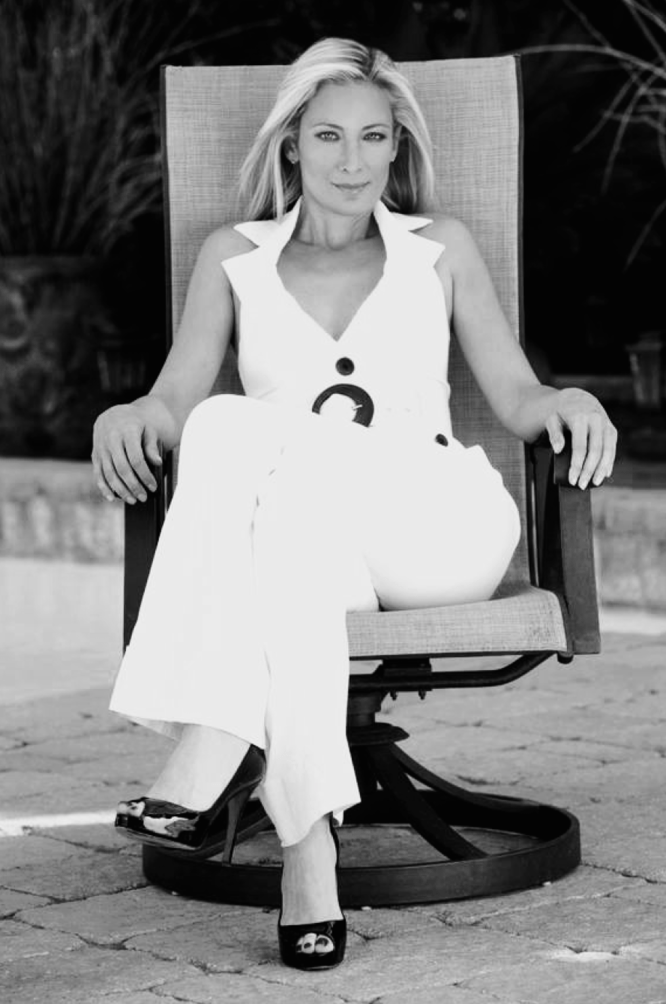 The busy and successful mother, aspiring author, entrepreneur, and founder and executive producer of Blueyed Pictures, Jamee Natella, speaks with us on her background in the industry, what a typical day-in-the life looks like, and what exciting venture she’s ready to pursue next.

Tell us about your personal background; how did you get involved with film production and founding your own production company? I have been working in films since I was a child actor in my hometown of Chicago. I was always interested in what was going on behind the scenes. I would come out of my dressing room early and look around the set. I was intrigued with every person’s job–from lighting, to producing, to directing. Eventually, I decided my creative soul and talents were best served behind the camera, and that’s when I became a producer. In my early 20’s I worked in production for several major studios in Hollywood. Benicio del Toro asked me to work on his directorial debut short film, and that was the start of my executive producer career in the mid-90’s.

When I produced a talk show in Tokyo, I came to realize there was a wide gap between Western and Eastern production quality, so I saw a way where I could fill that need by creating a global production company, which I named Blueyed Pictures. My teams in Los Angeles, London and Tokyo produce award-winning content for leading advertising agencies, PR firms and major corporations like Toyota, Pepsi and Virgin Enterprises, and many other Fortune 500 companies.

What do you love most about the work you do? I like the longer format that films offer, because I get a chance to tell a story–with layers. Bringing non-fiction narratives onto the screen is always my first choice, when I read scripts presented to me. I’ve just optioned a work about the first notorious serial killer. When I work on a storyboard for a commercial or break down a movie script, I enjoy working on everything from the budget to consulting with the director and cinematographer, and other members of the production team on how to jumpstart the project. There’s an enormous amount of creativity and stimulation in having that first fingerprint on a film, by launching the initial execution of the plan. It’s challenging and rewarding, when it’s ultimately me, as a line producer putting all the elements together. My reputation has been built on flawless production skills.

You’re involved with both commercial and film production; how do the two areas differ from one another? Commercial is much more corporate. There’s a different kind of work ethic behind it. Direct and clear communication is essential for each step, so I can know exactly what needs to be delivered. It’s more consistently structured. In longer formats–such as film, things can change in a nanosecond! From lighting set ups to changes in location or any number of scene situations where I am called upon to address solutions for the impending challenges. Since I’ve studied the playing field from the beginning, I can make stand-up, straightforward decisions in a heartbeat, that are compatible with everybody’s vision.

What artistic differences must you account for? Every film set is different, and with each project, the various personalities and experience levels of these creative experts are assessed. Observing the director interact with talent, and how the director relates to his or her director of photography and  producers is fascinating. It’s this intel which provides me with the methodology for how I approach my producing goals for a film. In commercials, I am at the top of the producing pyramid, but I hire the best of the best, and rely heavily on all of my staff. I not only listen, but I hear their ideas, as well as those of the advertising clients. It’s a high like none other; to be a part of the collaborative process from start to finish.

What is a typical day-in-the-life like for you? The truth is–I do a lot in one day! I wake up early, around 5:30 A.M. I am on three other time zones with business in New York, London, and Tokyo, so I scroll through my emails, but I don’t respond to them right away, unless there is a bonafied emergency. I go straight to the gym in my home and work out, and then I meditate as I cool down. My first real conversation of the day is with my nine-year-old son, Sammy, around 6:30, when I wake him up and get him ready for his day. I make sure we have a good breakfast together, and I pack a nutritious lunch for him, before driving him to school. By 8:00 A.M., I am back home, where I shower, and read over all my emails and texts before leaving for the office. Often, I will Skype with staffers at my London headquarters of Blueyed, as it’s afternoon for them before I start my day at my Los Angeles office. When I’m not filming, I’ll have one or two meetings a day with my Los Angeles commercial and events production team. I talk with my Tokyo team members late afternoon. Most days I work until 8:00 P.M, since it’s early morning there. At least two nights a week I am home early, so I can cook dinner for my son and husband. Right now, I’m writing my children’s book, so after Sammy is bathed and in bed, I unwind in bed and do some work on my book–either research or writing.

Are there any challenges you’ve encountered as a female film producer? Of course, I am aware that producing is still a male-dominated business, but I don’t consider myself a feminist-for-the-sake-of-being a feminist. I think I’ve excelled and gotten ahead in my career because I work really hard, and I show up–as opposed to showing off. Whether you are a man or a woman, it’s hard to deny someone his or her due if they are staying on point and doing fine work. There are detractors and there is a degree of politics that I deal with, but that would be with any job. Again, it goes back to great communication. Creating a free space for open collaboration, by explaining, not telling why I need certain expectations met goes a long way in getting the best out of everyone, including myself.

Tell us about some of your past work; what has been the most personally important piece of work to date, and why? I am always looking ahead, so my most important piece of work is yet to come. I am comfortable taking risks, and I take personal responsibility for meeting my goals, so that my dreams actually happen. That’s so important. An idea is worthless if there is never any action taken.

“I am always looking ahead, so my most important piece of work is yet to come. I am comfortable taking risks, and I take personal responsibility for meeting my goals, so that my dreams actually happen. That’s so important. An idea is worthless if there is never any action taken.”

Best location you’ve ever been to for a production shoot? Alaska. There was a lot of unspoiled nature to behold. It was an innocent time there, where people were not jaded by film production, and as a result, there was such an open and willing demonstration of cooperation and helpfulness from the community. There was a sense of giving, and trying everything to make it all work.

You were just at Cannes, correct? What are some of the current projects and events keeping you busy? My theatrical slate is filling up. I have back-to-back movie projects which I am producing in the coming months. The sequel to the tv adaption of “JL Ranch,” where I will once again be working with Jon Voight and James Caan. Julianne Moore’s brother Peter is my writer and director for an intense psychological thriller, and a huge A-list actor is on board for a major feature film.

What is the best piece of advice you’ve ever received? I have had so many great mentors, and each of them has given me invaluable nuggets which I utilize all the time. I would have to say the best piece of advice is the foundation for everything I do: Never accept ‘no’ as the final answer. The word ‘no’ is just not in my vocabulary. Very important.

“The word ‘no’ is just not in my vocabulary.”

What’s next for you? What do you hope to accomplish in the coming year? One of my biggest producing projects involves my commitment to creating more harmony between humans and our planet .I’m excited about some life changing sustainable living objectives I am establishing in early 2018. Singer Natalie Imbruglia and I are developing a line of eco-friendly household and personal products. I’m also heavily involved with the city of Los Angeles’ sustainable energy board, with my emphasis on solar power conversions for our utilities. Also, a major revamping of our consumption of tap water. It’s a very exciting time for me to be able to use my talents, experience and contacts to make a difference globally with these endeavors. I believe in giving back, because I am richly blessed!

It’s the season we’ve all been waiting for.